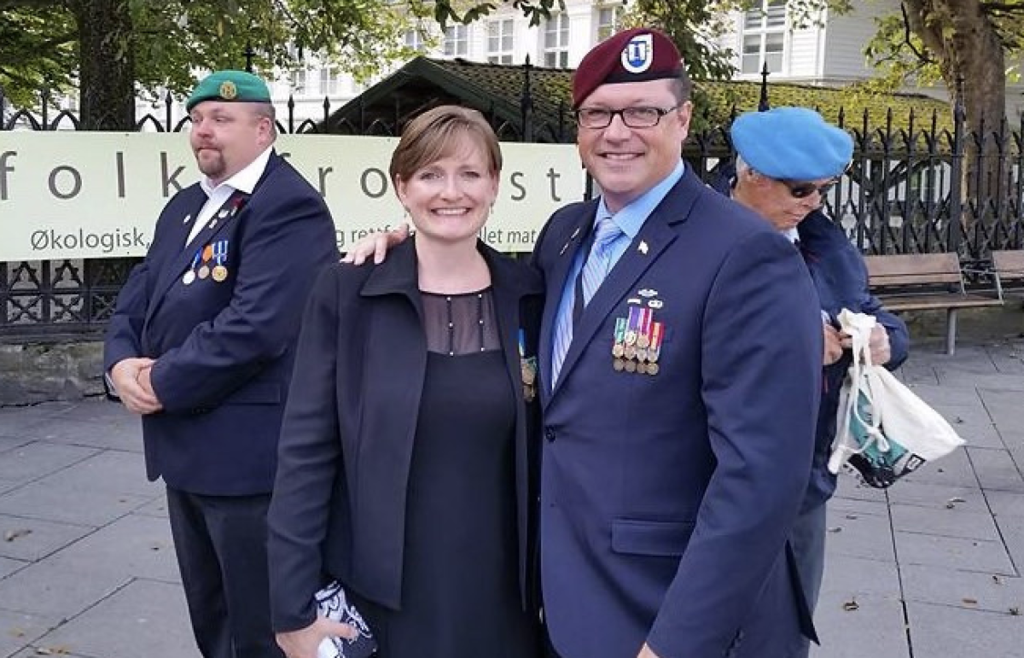 The Norwegian heritage
I was born in the United States to a long line of strong, good-looking Vikings! The Forseth family is very proud of our Norwegian background.  My great-grandfather Eivind Olav Forseth was born in Trondheim and emigrated with his wife Dagmar Jeannette Waadeland to the United States in 1903.  Eivind’s father Hans Adolf Forseth was a music composer, choir director and music teacher and played organ at Ilakirke in Trondheim; a park in the city bears a monument in recognition of Hans Adolf’s contributions to music. My father Eivind Borge inherited the Viking thirst for adventure and served in the US Navy aboard the USS Dale during the Vietnam War.  My mother Judith also comes from strong genes; her father Ladd Shorey served in the US Army during World War II.  Together Eivind and Judith ensured my older brother Eivind Olav II and I learned about our Norwegian heritage and encouraged us to explore lands outside of the United States.

The military background
My older brother Eivind Olav II joined the US Army and became a US Army Ranger with the 82nd Airborne Division based in Fort Bragg, NC.  My adventure started when I joined the Naval Criminal Investigative Service (NCIS) as a civilian Special Agent in 2001; during my almost nine years with the agency, I investigated sexual assault crimes and crimes against children with the Special Assault Unit, provided foreign counterintelligence support, and ultimately worked as a polygraph examiner and interrogator.  While supporting members of the US Navy and US Marine Corps and their families, I had the opportunity to tour aircraft carriers and submarines; ride in helicopters and C17 planes; fire 9mm pistols, M4 rifles, MP5 submachine guns, and an AK47 assault rifle; and get a face full of pepper spray.  In support of the Global War on Terror, I deployed to the Middle East on two separate occasions—to Bahrain, Kuwait, and Iraq in support of the III Marine Expeditionary Force and to Afghanistan in support of the Strategic Counterintelligence Directorate at Camp Phoenix, Kabul.  We coordinated regularly with US Army Criminal Investigation Command, US Coast Guard, and US Air Force Office of Special Investigations to ensure support to all branches of the military.

Irak,2005
My brother Eivind deployed to Iraq 2004 as a Platoon Leader with D Company, 2/325th Airborne Infantry Regiment, 82nd Airborne Division, in support of Operation Iraqi Freedom. On 4 January 2005, in the northern Iraqi city of Mosul, Eivind and his gunner were severely wounded as a result of a blast from an Improvised Explosive Device. Eivind was awarded the Purple Heart for his wounds sustained in combat.  I was fortunate that NCIS allowed me to work and live near Eivind and support him through his surgeries and recovery at Walter Reed Army Medical (WRAMC) in Washington, DC.  Before his injuries, my brother–like many soldiers at WRAMC–had made the choice to make the military his career; and due to injuries sustained in combat found himself adjusting back to civilian life, uncertain of his future, and searching for a new mission.

The change
With the goal of assisting veterans encountering the same challenges as my brother, I left NCIS and returned to school to study rehabilitation and mental health counseling.  This career hiatus provided the perfect opportunity to attend the International Summer School at Universitetet i Oslo in 2010, which I will always regard as my favorite adventure! I am grateful for the experience of living in Norway for an entire summer appreciating the beauty and culture and eating plenty of rømmegrøt and Kvikk Lunsj bars.  I now work as a certified vocational rehabilitation counselor with the US Department of Veterans Affairs Vocational Rehabilitation and Employment division, assist veterans in determining their entitlement to the Vocational Rehabilitation and Employment program, and provide vocational counseling and guidance to assist them in finding a career that is compatible with their interests, strengths, and any physical or psychological limitations they may have. I also ensure the veterans I serve have access to any medical or housing, etc, resources they need and are familiar with other veterans programs and benefits to which they and their family members may be entitled. I am very proud to serve our veterans and their families and am proud to be the granddaughter, daughter, and sister of veterans.

Back to Norway and Eurotreffet, Stavanger
Since retiring from the US Army, Eivind has continued to support the warfighters by working for the Department of the Navy and the Department of the Army.  Additionally, Eivind worked as the project coordinator for Project Healing Waters Fly Fishing (PHWFF) for three years following his retirement and has continued to be a very active participant and team lead for PHWFF, an organization dedicated to the physical and emotional rehabilitation of disabled active military service personnel and disabled veterans through fly fishing.  and I was fortunate to travel to Stavanger, Norway, in September 2016 with Eivind and my adopted brother, Norwegian Air Force veteran Øivind Moldestad–both presented on the PHWFF mission–and enjoyed learning the history of Norway’s overseas operations and as well as meeting friends among the members of NVIO during our visit.

Curious about the VA?
These links will give more information about VA compensation benefits, a tax free monthly allowance paid to veterans for disabilities that occur in service or are found to have gotten worse during military service. (incl. not only physical conditions and some mental health issues like PTSD but also physical conditions to include sleep apnea and mental health concerns such as schizophrenia).

The following links give some ideas about the efforts to expand VA benefits to Vietnam Veterans who are suffering health issues as a result of Agent Orange exposure. The second and third links specifically address the Blue Water Navy Veterans who will finally start receiving compensation benefits beginning 01/01/2020 after many years of discussion and lawsuits.

The following link tells you more about VA Vocational Rehabilitation and Employment (VR&E), the division where I work:

So to all veterans, in Norway or USA;  Thank you for your service!